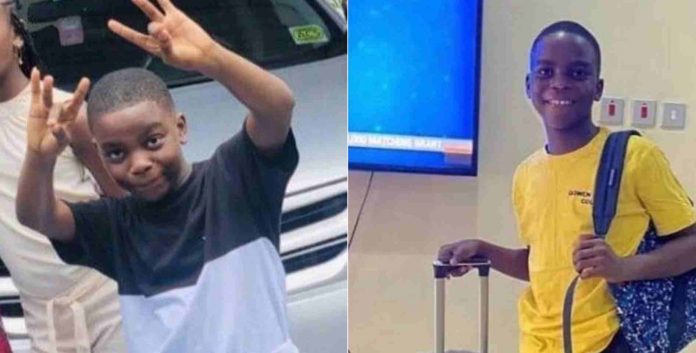 A 12-year-old Senior High school boy according to reports have been bullied to death by his seniors at school.

The school the boy attended was Dowen College, in the Lekki area of Lagos.

This was made known by the parents of the boy after Sylvester Oromoni Jnr. away.

According to the parents, Sylvester after his first term in school, changed drastically in attitude and behavior. He was not opened as he used to be in the past.

And so after sending him to school when school reopened Sylvester’s parents drop him in school only to be called that their son had collapsed which later led to the death of the young boy. But before Sylvester passed away he revealed everything done to him at school.

Read the full statement from Sylvester’s parents Below:

When Chidalu came back home from school after his first term,he was a different version of himself.

He jerks at little sounds and didn’t talk much,he also ate food like one who was being chased.

I kept asking him what was wrong but Chidalu didn’t divulge,he just shakes his head in the negative and mutter a silent no laced with fear.

I told my husband and he too tried to make our son talk,we bought him things,even a bicycle that he loves most but he didn’t say anything.

“He’s still adapting to boarding school life, don’t worry he will get used to it soon, don’t you see his over playfulness has reduced?” a friend of mine told me when I complained about him at the women’s meeting.

A day to their resumption date,Chidalu came to me and said something.

“Mummy can you talk to daddy to change my school?” That was the longest thing he had said for the three weeks he has been at home.

I dropped the clothes that I was arranging in his box and faced him.

“Chi why do you want to change school?”

He stared at me then bent his face to stare at his legs.

“Nothing mummy, don’t worry I’ll not change school again” he said and walked away.

I wish I had listened to him. Oh I wish!!

Me and my husband dropped him at school the next day and I can’t forget the gloomy look he had on his face.

Yesterday we got a call to come to the school that Chidalu was sick. They said he fell down while playing games.

But my son that I saw when we got to school didn’t look like who fell. Chidalu’s hands,face and legs was swollen and he kept writhing in pains.

“What happened to my son?!” My husband shouted at the principal who kept insisting he fell down.

My son could no longer talk as his lips were injured having deep cuts on them.

We immediately took him away from school to a hospital in town where tests were carried out and we were waiting for results.

“Mummy they hit me and locked me inside a cupboard for two days” Chidalu muttered to me silently when it was just I and his dad in the ward.

My heart flew and his dad had his eyes opened wide.

“Who are they?” He asked Chidalu.

“They said they will kill me,they always eat all my provisions and takes my boxers and singlets,they gave me Fayrouz to take forcefully then beat me” I was already crying and boiling.

My husband immediately began calling the police,he called the principal who hung up the call on him.

My Chidalu heaved and went stone cold,he died in my arms.

My husband fell to the floor and sobbed.

“Chidalu’s killers will never go unpunished! I will fight with my last blood and with everything I have to make them pay” my husband blurted.

He started calling everyone we know,then began making a video.

I drew Chidalu’s corpse to my chest,kissed his nose and whispered;”Nna m I’m sorry for not listening to you,for not pushing further to know what it was that made you grow cold. But I promise to fight for you,Biko don’t rest till you kill them too”….