A good samaritan has shared on Facebook, a sad story of one Antwi Bosiako who happens to be a graduate of the Legon University.

Mr. Bosiako who read Political Science at the University, had second class upper but finding a job has become difficult for him since he completed the institution in 2017 and has resorted to washing cars for a living.

The son of framers, caught the attention of the good samaritan whose name on Facebook was given as Mawuli Fui Kwadzovia by his good English conversation with a Co-attendant.

In a lengthy post on Facebook, Mr. Fui is calling on anyone who can help Bosiako to come to the aid of the young man. 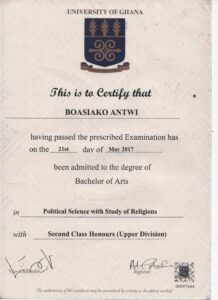 Upon reaching the car washing bay around 5: 43pm yesterday, a smart young man approached me and politely directed me to park whilst I await my turn.

Soon, it was my turn and he started washing the car. Whilst I was busily sharing my life experiences with one of his colleagues who normally washes my car, I overheard the gentleman telling another customer who just drove in English “ Boss, I will be with you shortly “.

That got me intrigued, so I approached the gentleman and asked him what is his educational background. This was his response ; “ I am a graduate of the University of Ghana “. What! a graduate of what I screamed.

Then I probed further, what did you studied and with what class? And he responded humbly “ Political Science- Second Class Upper “. At that point, I could feel nothing but a cold chill through my body. How could a fine brain like this be at the washing bay when he could use his intellect to do more for him self and family?

Indeed, I know this world is not balanced but we will do our best to make it balanced.

As to where he sleeps I will leave that for another day.

I am calling on any well meaning person out here to give this 27years young man whose parents (farmers) did their best and managed to get him through university a JOB this morning.