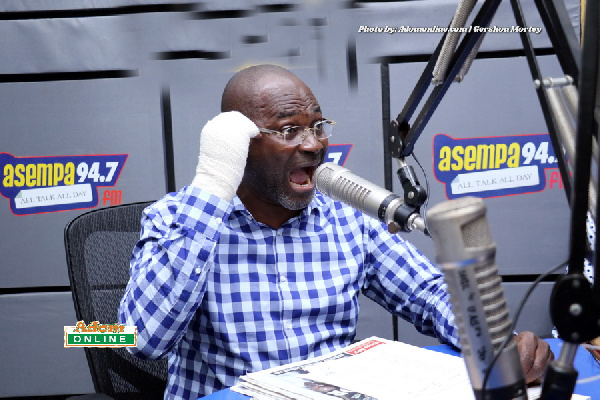 BREAKING: Ken Agyapong confesses Akufo Addo is in full support of his threats and verbal attacks against journalists in the country (VIDEO)

Member of Parliament for Assin Central Constituency, Kennedy Ohene Agyapong, has been captured in a video  bragging about Preisdent Akufo-Addo’s support for his (Ken Agyapong) threats and verbal attacks against journalists in Ghana.

The business mogul has on several occasions attacked media personalities in the country on countless of issues.

His verbal attacks and identity exposure of an investigative journalist, Ahmed Suale, led to the death of the journalist. Many people blamed the legislator for the death of Ahmed Suale but he vehemently denied the allegations indicating that he only wanted Suale and his team to do a good work and for that has no hand in Suale’s death.

As if all is at rest, the loudmouth has started his threats on broadcast journalist with Kumasi-based Luv FM, Erastus Asare Donkor. “That boy should be beaten seriously,” Agyapong said. “He is so annoying. For the foolish submissions he made before the [parliamentary] committee, we have to beat the hell out of him. If I were the president, I would have ordered this boy to be whipped.”

His threats comes on the back of recent shootings and killing in Ejura which the journalist was present at the scene and gave account of what he saw before the Kingsley Koomson Committee investigating the incident.

In the video sighted smartandstuck.com, Kennedy Agyapong has confessed that he has the full backing of Preisdent Nana Akufo Addo who is the president of Ghana, as such he has neutralize the influence of Abdul Malik Kweku Baako who is also close to the seat of government and thus an ally of Anas.