This follows an exposé carried out by Manasseh Azure Awuni which revealed the gargantuan corruption at PPA with Mr. Agyenim Boateng leading the charge. Manasseh uncovered the secret deals of the company and exposed the faces behind this illicit sale of government contracts.

In a letter signed by the Director of Communications at the Jubilee House, “The President of the Republic, Nana Addo Dankwa Akufo-Addo, has, by letter dated, Friday, 30th October 29 2020,terminated the appointment from office of, Mr. Aghenim Boateng Adjei as Chief Executive Officer of the Public Procurement Authority (PPA) L, with immediate effect.

This follows the submission of a report to the President by the Commissioner of the Commisifor Huma Rights and Administrative Justice (CHRAJ), Mr. Joseph Whittal, in which the Commission concluded that, on the totality of the evidence, Mr. Afyenim Boateng Adjei had put himself in a position where his personal interests conflicted with the performance of his functions as CEO and Board member OF the PPA.

It will be recalled that on 22nd August 2019,Presodent Akufo-Addo suspended Mr. Agyenim Boateng Adjei from his office, following a the broadcast of of allegations made against him in an investigative documentary conducted by Manasseh Azure Awuni, titled ‘Contracts for Sale’. He subsequently, referred the allegations involving conflict of interest to CHRAJ, and those relating to potential acts of corruption to the Office of Special Prosecutor, for their action.” 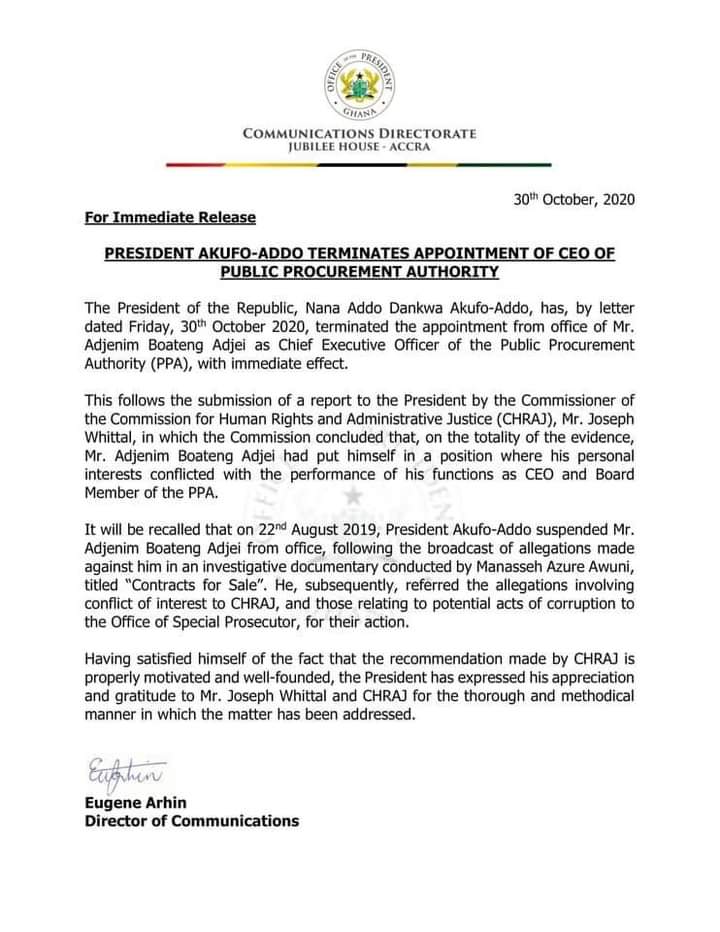 President Nana Addo Dankwa Akufo-Addo has ordered the arrest of a National Security Operative who assaulted a military some few days ago. In a video […]

The Opposition National Democratic Congress (NDC) has now promised to absorb all fees of Ghanaians tertiary students admitted in the 2020/2021 academic year. The party […]