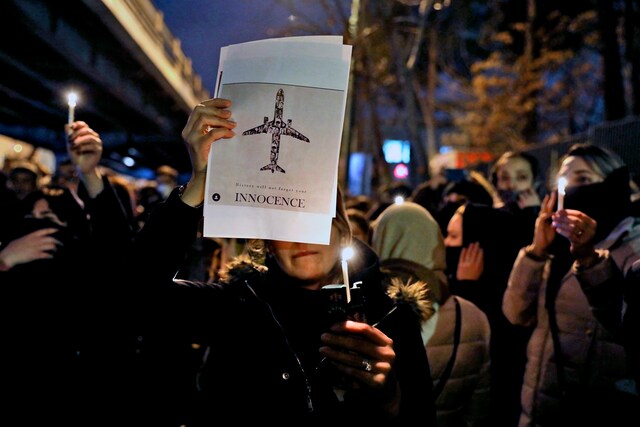 A Canadian court has ordered Iran to pay $84 million — 107 million in Canadian dollars — plus interest to the families of six people who died when a passenger plane was shot down near Tehran in 2020.

Ukraine International Airlines Flight 752 was downed minutes after takeoff near the Iranian capital on Jan. 8, 2020. All 176 people aboard were killed when missiles from the Iranian Revolutionary Guard struck the plane en route to Kyiv, in what Iran’s former president Hassan Rouhani called at the time a “disastrous mistake.”

There were 85 Canadian citizens or permanent residents on board, according to the judgment from Ontario’s Superior Court of Justice, dated Friday. Some 53 others were also on their way to Canada via Kyiv, he added. Nationals from Iran, Ukraine, Sweden, Afghanistan, Germany and Britain were among those killed, with some relatives filing suits in other countries.

The judge, in his decision, said the case probably represented the first time a Canadian court had been asked to determine damages “for loss of life caused by terrorism.” “This court well understands that damage awards are a poor substitute for the lives that were lost. But a monetary award is the only remedy that a civil court can provide,” Justice Edward Belobaba wrote.

It’s unclear whether Iran, which did not attend or make submissions to the court, will make the payments. Tehran has previously offered the families of those killed $150,000 per victim. The Iranian Foreign Ministry did not immediately respond to requests for comment.

Several families have said they want justice, not money.

Lawyer Mark Arnold, who represents families of some of the Canadian victims, said his team would look to seize Iranian assets in Canada and abroad for the payments, the Canadian Broadcasting Corp. reported.

The decision is “unprecedented in Canadian law,” Arnold said in a statement Monday. “It is significant for the impact it will have on immediate surviving family members seeking justice.”

Those bringing the claim for damages included Mehrzad Zarei, who lost his 18-year-old son, Arad; and Shahin Moghaddam, who lost his wife, Shakiba, and their young son Rosstin, the judgment said. Others seeking compensation were granted anonymity by the court over fear of reprisals, the judge added.

Belobaba, the judge, also reiterated his decision in May that concluded Iran “was civilly liable,” saying the “missile attacks were intentional,” and “the shooting down of the civilian aircraft constituted terrorist activity under applicable federal law.”

Iran has not publicly responded to the Canadian court’s compensation ruling but has previously admitted responsibility for the disaster, blaming “human error” but denying any systemic flaws.

At the time, the incident led to mass protests on the streets of Tehran in a show of national anger. Iran has said the operators who fired the missiles made a split-second decision and were unable to distinguish the passenger jet from potentially hostile aircraft amid an escalating confrontation with the United States after its killing of Iranian military leader Qasem Soleimani.

Iran’s civil aviation body in a final report released in March also blamed a misaligned radar and an error by an air defense operator. Canadian and Ukrainian government officials criticized the report, citing a lack of transparency.