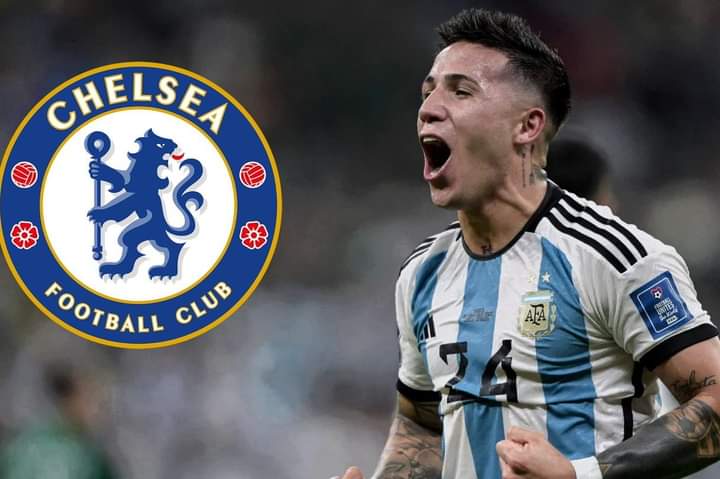 Chelsea have intensified their search for a new midfielder in the January transfer window and Argentina World Cup winner, Enzo Fernández is top of the list.

The Benfica talisman who was crowned the best young player in the 2022 FIFA World Cup in Qatar has been of great interest to many European clubs. However, Chelsea is the only club who have shown a great interest in the player and the club is willing to pay Fernández’s release clause for £120m to Benfica.

Benfica on the other hand have stated that they would wish he stays and finishes the season so that he can leave in the summer instead.

It has been reported by sections of the media that Enzo Fernández favors a move to the English Premier league and hence he sees Chelsea as a better option for him and his career. The deal could be announced within the week if all terms are agreed as Chelsea are insistent on getting the player

Chelsea after parting ways with their manager Thomas Tuchel and appointed Graham Potter, things have not been well for them at all. Currently, they are out of the champions league place in the league and if they are unable to amass points they could be playing in the Europa league next season.

On 23 June 2022, River Plate reached an agreement with Primeira Liga team Benfica for the transfer of Fernández for a €10 million fee for 75% of his economic rights plus €8 million in add-ons, but with the player remaining at River Plate until the end of the club’s Copa Libertadores campaign. Following River Plate’s round of 16 exit from the Copa Libertadores, on 14 July, Benfica confirmed the deal,[15] being given the number 13 shirt, previously worn by club legend Eusébio.

On 3rd November 2021, he was called up by Argentina national team manager Lionel Scaloni for two 2022 FIFA World Cup qualifiers against Brazil and Uruguay. He made his senior team debut on 24 September 2022, by coming on as a 64th-minute substitute for Leandro Paredes in a 3–0 win against Honduras.

On 11 November, he was named in Argentina’s 26-man squad for the 2022 FIFA World Cup. After coming on for Guido Rodríguez in the 57th minute, on 26 November, Fernández scored his first international goal, closing Argentina’s 2–0 group stage win against Mexico. In doing so, he became the second youngest player ever (only behind Lionel Messi) to score a World Cup goal for Argentina at 21 years, ten months and thirteen days old. On 3rd December, he achieved a rather not so famous record, becoming the youngest player to score an own goal in the history of Argentina in the FIFA World Cup, in the round of sixteen match against Australia, when his attempt to block Craig Goodwin’s shot instead deflected into his team’s net as Argentina beat Australia 2–1. After defeating Croatia 3–0 in the semi-final, Fernández played in the final against France, where Argentina won the World Cup by a score of 4–2 on penalties. He was named best young player of the tournament.