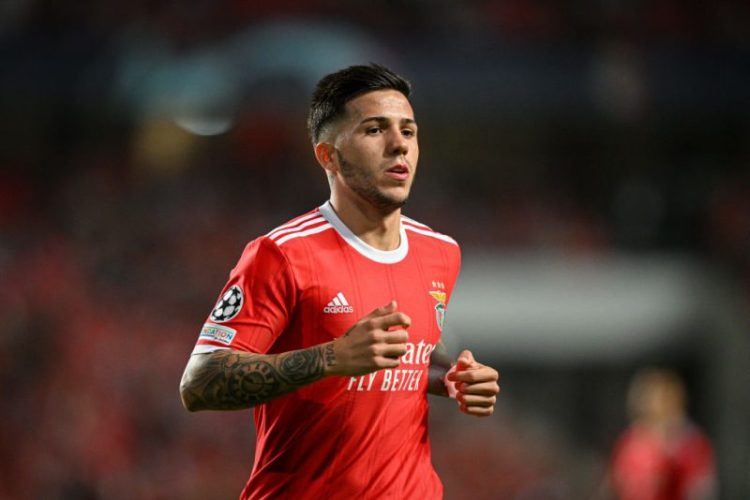 Chelsea were believed to be the only club willing to pay Enzo Fernández’s release clause as they were in serious demand of the player. However, reports from several media outlets indicate that the London club has bowed out of negotiations with Benfica as they could not raise the player’s €120m release clause.

Benfica have always asked for the €120m release clause or no deal but Chelsea were offering an amount in the region of €85m which is way below the player’s release clause.

It is understood that Fernández was eager to move to the Premier League and even absented himself from a series of training sessions.

He even had a discussion with his manager and the club to consider Chelsea’s offer but the Club was firm to insist either the release clause or no deal.

Fernández will be a huge target for a lot of clubs in the summer with the likes of Manchester United, Liverpool, Paris Saint-Germain still monitoring the situation. Chelsea on the other hand cannot be ruled out for a summer transfer since they are still interested in securing a midfielder.

Benfica’s transfer statistics in recent years has been very impressive. In the summer 2022, the club transferred their leading striker Darwin Núñez to Liverpool for a transfer fee of €80m even though they paid €34m for the player from UD Almeria. In the 2019-20 season, João Felix was also transferred to Atlético Madrid for a club record fee of €127m.

In 2020, they were ranked number one in the top ten selling clubs in Europe with a cumulative fee of £1bn ahead of Atlético Madrid £953m.

Even though the club is a selling club, they will only do that when the right amount arrives and they believe that with the kind of performance Fernández demonstrated at the World Cup, a lot of clubs will be coming in for his signature when the season ends.

The Blues are currently struggling to get reliable midfielders to help them this season. The likes of Jorginho, Kovacic and Ruben Loftus-Cheek are all not living up to expectations as they keep on giving inconsistent performances week in, week out.

Their hard working midfielder N’Golo Kanté has been out due to a long term injury. His absence has really affected the club with the club not having any replacement for him.

Todd Boehly will still pursue other targets with the aim of getting the club back on track. Chelsea are now out of Champions League place and sit 10th on the league table with 10 points behind fourth place Manchester United.

Chelsea face Premier league champions Manchester City in a Premier league match today at Stamford Bridge. Graham Potter and his team will want to win to at least club the gap on the top four.

Manchester City on the other hand are second on the league table with 8 points behind league leaders Arsenal and any points dropped will mean they will have to do more than hundred percent to retain the league title.

The two teams both drew in their previous matches. Chelsea drew 1-1 with Nottingham Forest away whilst Manchester City drew 1-1 with Everton at Etihad Stadium. Both teams will want to return to winning ways in their first match of the year 2023.

The two teams have played 172 matches

Chelsea have won 71 and lost 61 with 40 drawn matches ending in a draw.

Biggest win for each team

No side has beaten Pep Guardiola’s Man City on more occasions in the Premier League than Chelsea, who have five wins since the start of the 2016/17 season.

Chelsea are looking to prevent Manchester City recording a fourth successive victory against the Blues for the first time in their history. Chelsea’s last win against City was their Champions League success in Porto in May 2021.