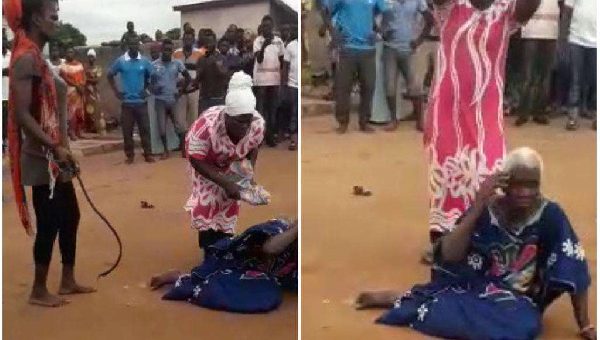 Five suspects who were eyewitnesses of the tortured Akua Denteh went through at the hands of some heartless people have surrendered to the police for investigations into the matter.

The unfortunate incident happened at Kafaba in the East Gonja Municipality of the Savannah Region.

And it comes at the backdrop of an arrest made on the Chief of the area, Zackaria Yahaya.

Also: 90-year-old woman beaten to death for being a witch (WATCH VIDEO)

The older woman was beaten till he gave up the ghost after she was accused of being a witch preventing rainfall in the area.

The incident happened on Thursday, July 23, 2020 in the East Gonja Municipality.

The old woman’s body has since been deposited at the Tamale Teaching Hospital (TTH) mortuary.

Meanwhile the Inspector General of Police, James Oppong-Boanuh, has placed a Gh¢ 2,000.00 reward for anyone who can assist the police with information leading to the arrest of any of the suspects.

Alcohol and it side effects