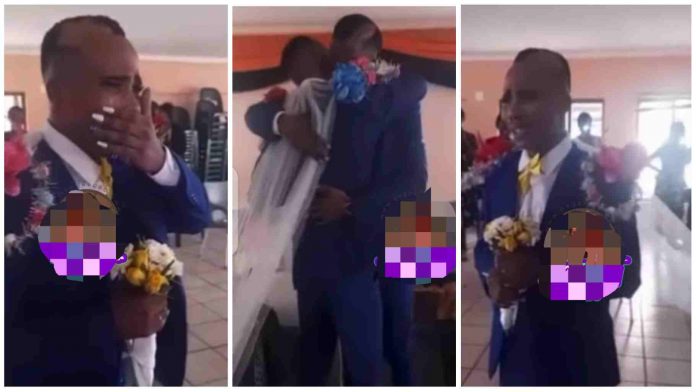 A rather bizarre moment captures a gay bride who was weeping like a baby as if he has lost his family as he was been weeded to his partner in a colorful ceremony.

They were both in suits, and in what appears to be a dream come true the gay bride walked straight to his groom and gave a long hug still in tears.

Social media users have reacted to the video and have condemned them for marrying each other, while others are still in disbelief.

Meanwhile, the debate on LGBTQI+ in Ghana has taken the main stage in Ghana as a lot of Ghanaians have expressed their disgust towards the practice therefore calling on government to immediately pass the bill into law.

Some experts are also of the view that the bill when pass into law, has it consequences on the country as a whole indicating that some benefits enjoyed by the country will be taken away by some European countries championing for the rights of LGBT people.

However, the Christian, Traditional and Muslim community have thrown their weight behind some Members of Parliament who are championing for the LGBT bill to be pass into law with Member of Parliament for Ningo-Prampram, Sam Nartey George, leading the charge.

Answering specific questions on the vexed issue of homosexuality in the country vis-a-vis the bill before Parliament, President Akufo-Addo said he recognised the fact that the matter bordered on public opinion that was going through a legitimate process.

“What I will hope for is that the debate would be civil and that we will recognise the need for us to be tolerant with each other and with opposing views,” he stated.