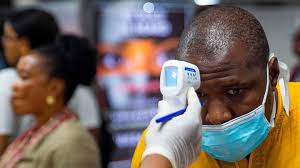 A lady based in Holland has disclosed how her junior brother who tested positive for coronavirus get his freedom to roam the streets of Accra in the night after paying 20ghc to nurses at the 37 military hospital and this has become a worry to her since her brother can infect others with the virus.

According to the lady, her brother informed her of this new development after testing positive for the virus and has been quarantine to avoid contact with persons who have not been infected. But, her brother has found his way to bribe nurses at the facility so he can be set free in the night and get quarantined during the day which she does not see it as appropriate and for that has to call the attention of Ghanaians to these practices being done by some health professionals in the country.

She also feels her brother might infect someone with the disease and for that, authorities of the 37 military hospital need to check their health workers very well so they do not become agents in the spread of the global pandemic coronavirus.

“My brother was admitted at the 37 military hospital after he tested positive for coronavirus. I’ve been calling to check up on him every day but I called him one day and I heard loud noise at the background and I questioned where he was. Surprisingly he told me he was in town and I asked him what he was doing in town as at 8pm…

He told me that he pays the nurses 20ghc each night so that they will set him free to roam the streets of Accra in the night and report to the hospital in the morning and it has been going on for some time now. I call on authorities to take action against this practice because I know the negative effects the actions of those put in charge to cater for coronavirus patients can cause.”

The deadly disease has claimed the lives of more than 13,000 people after it short existence with Italy recording the highest death in a single day.

Ghana has recorded 2 deaths with the recent one involving an elderly who was admitted at the Komfo Anokye Teaching Hospital after she started showing symptoms of the disease. So far the country has recorded 3 new cases making the total number of recorded cases 27.