If Akufo-Addo can disappoint God by failing to start the foundation of the Cathedral in 4 years; what makes you think he’ll fulfill the 88 hospital promise he made – Manasseh

Award-winning Investigative journalist, Manasseh Azure Awuni, has said Ghanaians should stop putting their trust in the Akufo-Addo led administration to complete the eighty-eight hospital promise since the President has even disappointed God.

In a post on his Facebook page, the astute journalist noted that if President Nana Addo Dankwa Akufo-Addo could not use four years to even lay the foundation of the cathedral he promised God then how on earth do Ghanaians think he cares about them and will build the hospitals he promised.

“A man promised to build one cathedral for God if he became president. After four years of being president, he has not built even the foundation of the cathedral. That same man has promised to build you 88 hospitals in one year, and you’re already complaining. Are you the one who impregnated God’s mother? Or what makes you think you’re more important than God? That he can delay in fulfilling God’s promise and not yours? 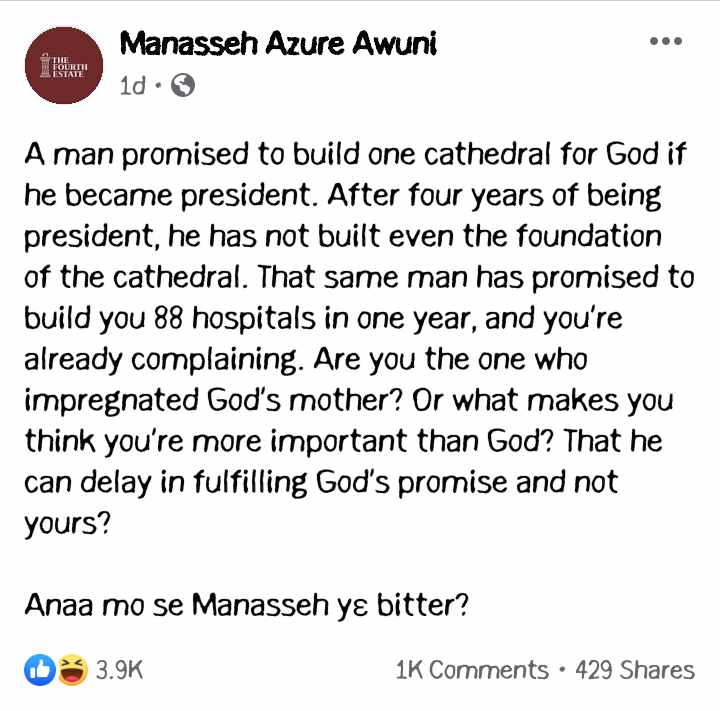