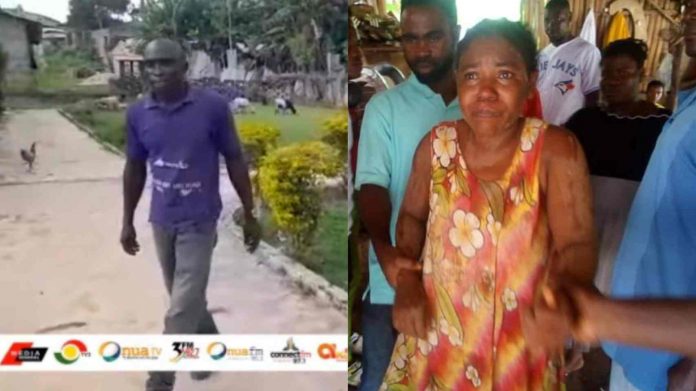 Josephine Panyin Mensah, the pregnant woman who was reported missing in Takoradi, lost her baby after a struggle with her kidnappers, according to a carpenter who found her at Axim.

According to Kwesi, his initial inclination was that she was mentally derailed when he first saw her Tuesday morning sitting in a garden at the premises of the Jehovah Witness church at Tolanu, a suburb of Axim.

He noted that he approached the Josephine who was by then crying.

Nana Kwesi said Josephine was weak and could not do anything and so he walked her to his carpentry shop.

Also READ: “They wanted to use her for rituals but failed because she’s carrying twins”-Unconfirmed reports say about pregnant Takoradi woman who went missing

But Josephine who could not talk at the moment was using sign language to communicate was and insisting for a pen and paper on which she wrote the contact of her pastor and requested he be called.

Through the sign language of Josephine, Kwesi got to know that Josephine lost her baby due to the struggle between her and her kidnappers.

Josephine, was reported missing on September 17, after a search for her did not yielded any results.

Josephine who has always been going for a walk since she became pregnant went on her usual exercise on Thursday September 16 but never returned.

Michael Simmons, her husband told police that his mother-in-law later had a call from an unidentified persons demanding certain amount of money from the family before Josephine would be set free. That was when they became aware that their beloved has been kidnapped.

A call later came in that she has been released but Josephine could not be found.

Her brother-in-law told Takoradi-based Connect FM’s Paa Kwesi Simpson that the family received a call Tuesday morning that she has been spotted in Axim and they followed up to find her alive.