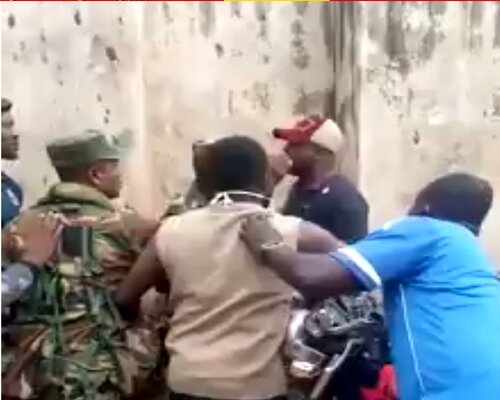 It has been alleged that a National Security operative has been captured threatening a police officer at Asawase in the Ashanti region.

The supposed National Security officer is sighted in a video that has since gone viral threatening a uniformed Police Officer in the full glare of Military Officers.

Brandishing a pistol in the full glare of the public, the alleged operative is seen pouring invectives on the officer whilst military men present try effortlessly to calm him down.

It is unclear what might have necessitated the attack but it has raised a whole lot of debate as far as the security in the country is concerned.

Last week the Member of Parliament for the Awutu Senya East Constituency, Hawa Koomson opened fire as a polling station.

The MP has admitted to firing the gun at a registration center in the constituency on Monday, July 20 in self-defense.