The Economic and Organised Crime Office (EOCO) in a joint operation with the Medical and Dental Council(MDC) Ghana have arrested two medical doctors and four nurses over baby harvesting and trafficking in separate operations.

In all ten persons have been arrested including two social welfare officers and other individuals who were supposed to be engaged in the illegal act.

The two institutions began the investigation after a tip-off from a taxi driver upon a conversation between two women who boarded his taxi.

According to a release by EOCO signed by the Executive Director, COP Frank Adu Poku(Rtd), it stated that they have been investigating activities of medical practitioners, nurses, social welfare officers and some individuals who were believed to be engaged in the illegal act of baby harvesting and trafficking.

According to the statement, EOCO carried out it investigations into the illegal activities between the periods of June to November 2020 and two medical doctors, two social workers, four nurses, two mothers and one traditional birth attendant have so far been arrested and are on a bail pending further investigation.

One doctor was arrested at his private health facility in Accra. This Doctor is said to have sold the first baby to the investigative team for an amount of thirty thousand Ghana cedis(Ghc30,000.00) and in another health facility in Tema also sold another baby for twenty-Eight Thousand Ghana cedis(Ghc28,000.00) after the suspect agreed to help in purchasing a newborn baby.

The statement also reveals that another Doctor, Noah Kofi Lartey, has been picked. 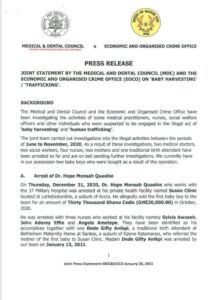 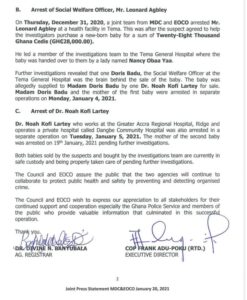