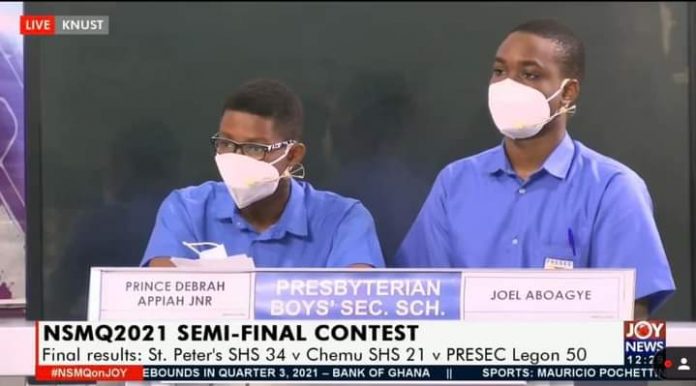 The Presbyterian boys Secondary School (Presec) has said through to the Grand finale of the 2021 National Science and Maths Quiz(NSMQ) for teh third consecutive time in a row.

The Accra-based school was leading from the onset of the competition which was a tight one.

The completion came of at the Saarah-Mensah Auditorium of the Kwame Nkrumah University of Science and Technology (KNUST).

The boys in blue proved a point from start of the contest that they want to make it seven and defend the championship as they did in 2008 and 2009. The victory sent Presec supporters roaring beyond control.

Three-time winners, St. Peter’s SHS, failed to increase their tally to four as they could not double their efforts to be at par with their rivals.

Having been ranked as one of the seeded schools to partake in NSMQ 2022, they can restore that hope in the next edition of the national championship.

Chemu SHS, after defeating 2019 champions St. Augustine’s College, could not be as impressive as was anticipated. The giant layers crawled with few points that barred them from entering the ‘promised land.’

All three schools had some difficulties. However, those parasitic questions got all the schools racking their brains only to receive ‘oh no’ answers.

At the end of the competition Presec amassed 50 point while St. Peter’s scored 34 points as Chemu SHS manged with 21 points.

WASSCE: Boy who worked as barber to see himself through JHS and SHS scores 4A’s, seeks support (PHOTOS)

PHOTOS: “The beginning of 8As” – 3-year-old girl hailed for scoring excellent grades in end of term exams

Check Out : Salary of Teachers, Diploma and Degree holders