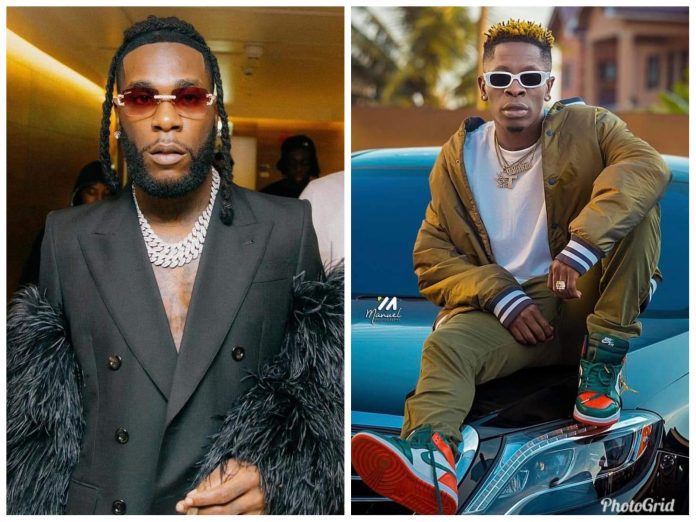 Nigerian musician and 2021 Grammy award winner Burna Boy had all this while wanted to fight Ghana’s Dancehall act Shatta Wale and end the latter’s life.

Burna Boy added his voice to the ongoing Shatta Wale initiated beef between Nigerian and Ghanaian artistes which has been trending since Sunday 26th of December, 2021.

” PUSHING THIS AGENDA OF SEPARATION BETWEEN OUR BEAUTIFUL AFRICAN NATIONS IS A GRAVE DISSERVICE TO THE GENERATIONS COMING AFTER US. AND IT GOES AGAINST EVERYTHING I STAND FOR AS A MAN AND AS AN UNAPOLOGETIC PAN AFRICANIST. THEREFORE, IF SHATTA OR ANYONE HAS A PERSONAL PROBLEM WITH ME. I’M STILL OPEN TO FIGHT 1 ON 1 AND SQUASH IT AFTER. THE SAME WAY I’VE ALWAYS BEEN. NOBODY WILL RUIN THE UNITY WE CONTINUOUSLY TRY TO BUILD FOR A STRONGER AND BETTER AFRICA”

However, Shatta Wale in another tweet revealed Burnaboy had issues with him because of a woman.

A fan chancing on this outbursts by the two ex friends sent a private message to Burna Boy and here is their conversation below.

So all this while @burnaboy wanted to kill Shatta Wale pic.twitter.com/mhJuwvwsnZ