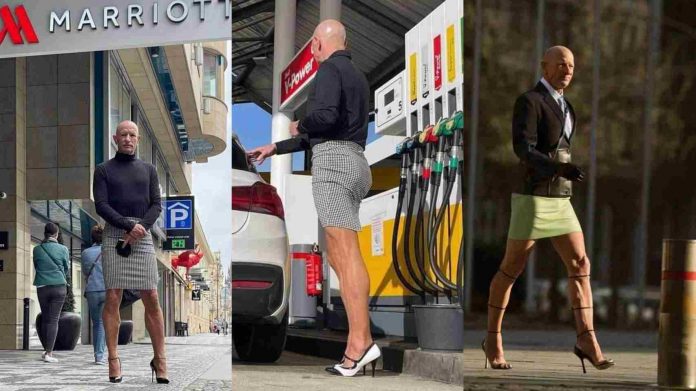 Gender stereotypes in various societies have made people who have great potentials to become great men and women, powerless and unproductive.

One of the commonest type of gender stereotype is the dressing code for men and women. One is classified as weird and insane when the person is in the dress code of the opposite sex.

Some Cultures prohibit men from wearing a female dress and vice versa. Dressing outside of those parameters is frowned upon and even illegal in some cases.

A new trend in Ghana is men wearing female clothes and ladies wearing men’s clothes which has become some sort of fashion in our modern world.

A Ghanaian fashionista Richard Brown popularly known as Osebo The Zaraman and musician Wanlov the Kuborlor started a trend of wearing skirt in Ghana.

And in the same light, a man in Germany has also decided to break gender stereotypes by serving as an example.

Mark Bryan is a 61-year-old American citizen living in Germany, a robotics engineer who openly admits that he likes to wear skirts, dresses, and heels.

Mark has a wife and daughter and has a fairly normal life, he goes from home to work every day, exercises, and occasionally enjoys an outing with family and friends.

However, his particular way of dressing has made him famous in the last few days, with hundreds of people growing interested in him and his decision to wear skirts.

Despite receiving many critics, Mark assures that there are more people who make positive comments to him and he also affirms that he has the support of his wife who has been essential for Mark to feel comfortable expressing himself as he prefers through his clothing.

This man tries to show that clothes have no gender and that maybe if we stop worrying so much about appearances, we could really get to know the people inside them and realize that despite the many differences that we may have, we will always have more positive things in common.

South African rapper Casper Nyovest organises boxing match between himself and an ‘Agenda Boy’ who always insults him; beats him mercilessly (WATCH VIDEO)