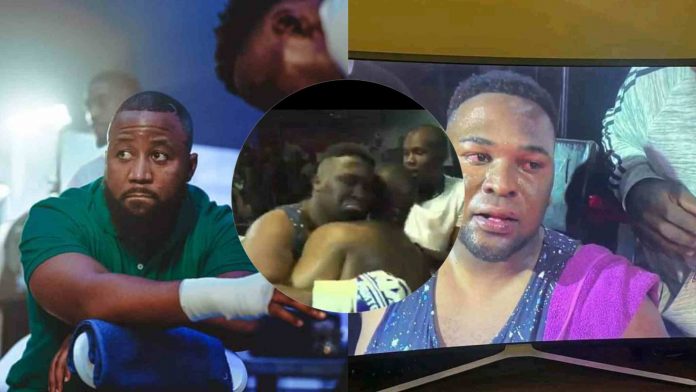 South African rapper Casper Nyovest has shown the way for other celebrities on how to deal with with constant trolls from people.

The agenda boy has always been on the nerves of the Multiple-award winning musician insulting the latter on any issue.

While other celebrities find peace in blocking those who troll them, the rapper set up a bout between himself and the man called Slik Talker to settle their scores in a boxing ring and he beat the hell out of Silk Talker.

The bout which was stagged ‘Fame or Clout’ was streamed online by over 100,000 people.

After a little above a minute and 30 seconds into the 3rd round, Cassper Nyovest was awarded a technical knockout victory by the judges as Slik Talker was clearly struggling to balance himself.

Their fight trended across social media. A lot has praised YouTube Slik Talker for accepting the challenge. Although he was beaten, he bagged a whopping R200 000 from the fight.

In other news, It was an eyesore in Ghana’s Parliament yesterday December 20 as some members of Parliament exchanged brawls in the House over the controversial Electronic Transfer Levy Bill, also known as e-levy.

According to a photo footage which smartandstuck.com has come into contact with and has been confirmed to be the Sports Minister, Hon Mustapha Ussif, the honorable Minister could be seen receiving a hefty slap from a member on the minority side.

This came as result of when the sit-in Speaker, Joseph Osei-Owusu, had announced that he was going to vote as well in his capacity as a Member of Parliament.

It got the National Democratic Congress party members who are the minority in Parliament angry and they questioned his decision to vote after presiding over the night’s proceedings.

They hurriedly moved to the front of the dias issuing threats at the Be kwai MP.

This also got the Majority side in Parliament to also defend the 1st Deputy Speaker from been harmed and immediately Mr. Joseph Osei-Owusu handed over the presiding role to the Second Deputy Speaker, Andrew Amoako Asiamah, fight Broke out leading to Hon. Mustapha Ussif taking his share of the fight by receiving a hefty slap.