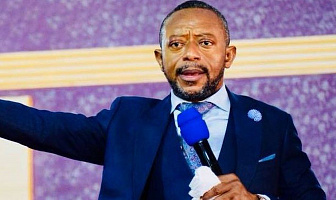 Reverend Isaac Owusu-Bempah of Glorious Word Power Ministries International has been sent back to police cells to serve his one-week remand sentence.

The self-acclaimed ‘Nation’s Prophet’ was reported sick yesterday evening and was taken to the police hospital for medical attention. However, he was released the same night and sent back to police cells to serve his sentence.

Sources have it that the boastful man of God has been pleading with people in high authority to get him out of his current location but it seems no one is willing to offer a helping hand to him.

Rev. Bempah has been charged with threat of life for threatening to kill Nana Agraada as well as offensive conduct to the breach of peace, made his first appearance before the Accra Circuit Court on Monday, along with five other members of the church.

The other five were also refused bail.

Owusu Bempah and his co accused church members were taken to court amidst a heavily armed police escort.