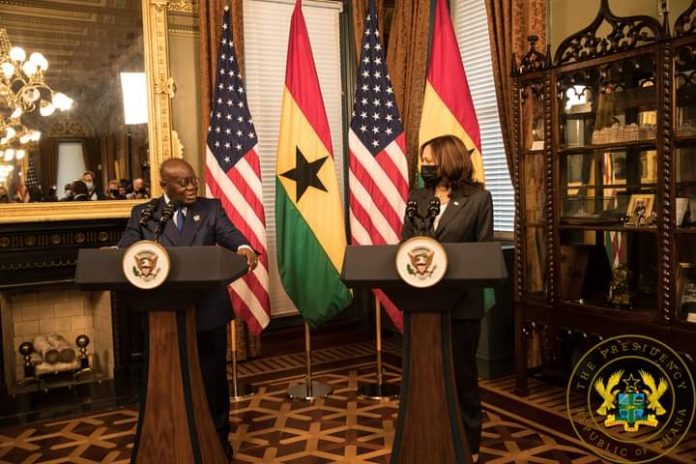 According to her, Ghanaians voted during a free and fair elections last year.

this demonstrated the nation’s commitment to democratic principles and institutions.

She said this on Thursday, 23rd September 2021, when she held bilateral talks with President Akufo-Addo at the White House, with the aim of stringing the ties of co-operation and friendship that exist between the two countries.

“Last December, the people of Ghana voted in a free and fair election that demonstrated your nation’s commitment to democratic principles and institutions,” she told President Akufo-Addo. 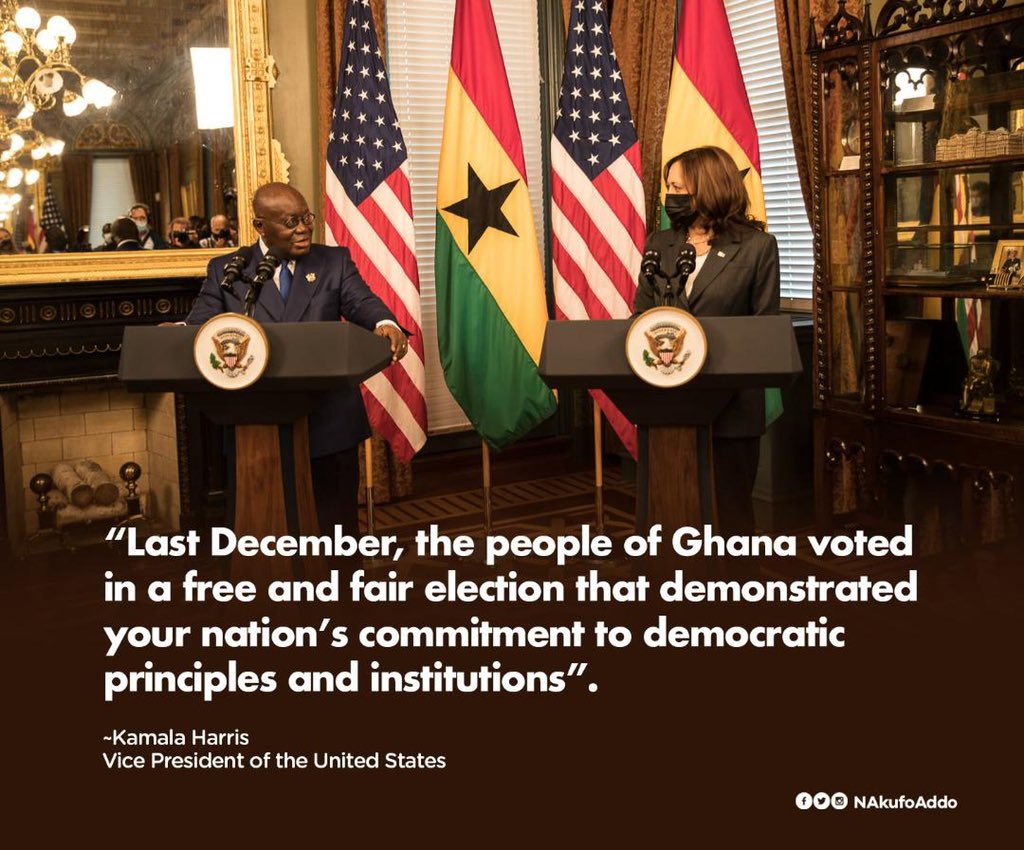 She further commended President Akufo-Addo for creating the enabling environment for American businesses to thrive in the oil-producing West African country.

She stated that American companies continue to ramp up in Ghana, understanding the significance of the work that they do there to America’s economy much less to the partnership between Ghana and the United States.

Welcoming President Akufo-Addo to the White House, Mrs. Harris indicated that the meeting with the Ghanaian President “is a reaffirmation of the strength of the relationship between the United States and Ghana, and of course we have deep in historical ties or official bilateral relationship began in 1957.”

She stressed that “American companies continue to ramp up in Ghana, understanding the significance of the work that they do there to America’s economy much less to the partnership between Ghana and the United States.”

“And they do this also because we are confident in the Government of Ghana and the environment, Mr. President, that you have created, which allows for some confidence in the respect and upholding of the rule of law and human rights. And so, with all of that, we look forward to continue to work together.”

On his part, President Akufo-Addo thanked Vice President Harris for the invitation, and stressed that Ghana and the United States of America share very much the same commitments.

“We want to develop our nation as a democracy as a country where freedom and respect for human rights and the rule of law are paramount to our system of governance,” he said.

Whilst expressing gratitude for the support of the United States towards helping to defeat the pandemic in Ghana, he indicated that the “other main preoccupation for us is the co-operation that we have to put together to defeat the Jihadist insurgency in the Sahel.”

It is an area, he said, that requires the support of the United States Government.

“We are looking for support for our armed forces and for the intelligent agencies of our area that they can be in stronger positions. Many of those leading the Jihadist insurrections in West Africa are the people who came from Iraq after they were driven out from Iraq, so I think if there’s information here that can assist us to be able to track down and be able to deal with these people,” he said.

President Akufo-Addo was hopeful that Ghana and America, now and in the coming years, will continue to “advance our mutual causes, and also strengthen the relations between our two countries.”