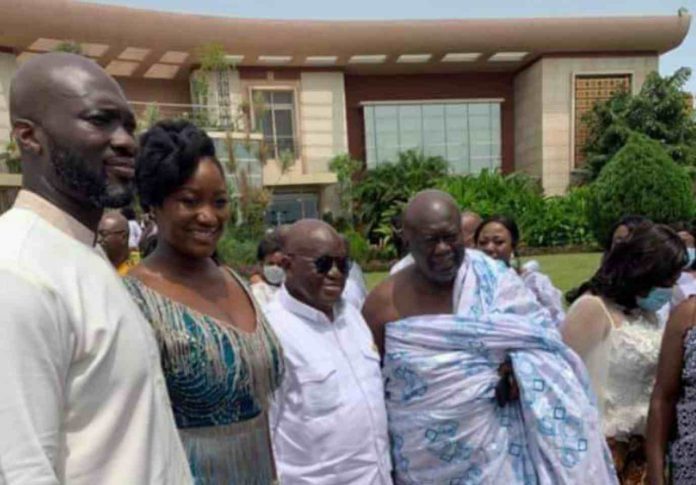 A video that has been sighted by smartandstuck.com captures moment President Akufo-Addo asked his third daughter Edwina Nana Dokua Akufo-Addo whether he should accept the bride price from the Jumah family which she nodded in affirmation.

In an Akan traditional marriage, before marriage is being approved, the father of the groom needs to ask his daughter whether he he should accept the bride price.

This is to prove a point that the groom was not forced into the marriage since her consent was sought.

In the video we have seen, the President is heard asking her daughter Edwina Nana Dokua Akufo-Addo if she agrees to marry the son of Kofi Jumah, the Managing Director of GIHOC Distilleries company. ND her response was ‘yes’.

The scene came with applause from few invited guests who were there to share in the glorious moments of joy.

A traditional ceremony to cement their relationship came off at the Presidential Villa in Accra on Saturday 9th October, 2021 with a few people in attendance.

We cannot tell when the two started off from but we are reliably informed that Kwabena Jumah who has lived all his life in New York until two years ago is married to a Jamaican woman with whom they have three children.

What is unclear also is if Kwabena Jumah has been able to divorce his Caribbean wife who refused to agree to a divorce term from the former.