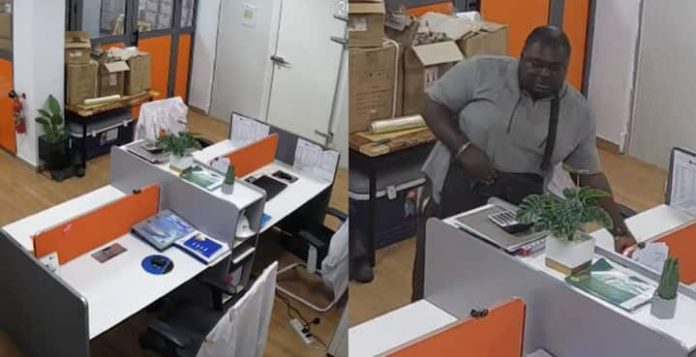 A man who appears to be middle-aged was able to confidently enter an office and take all the laptops lying around although he was recorded in CCTV footage.

It is reported that he was at DCL Laboratory Products Ltd, a company located at Ogbojo roundabout, and specialized in the installation and servicing of medical equipment.

He walked into the office, introduced himself to the cleaners as a staff, got access, and then take laptops and walked away majestically.

Interestingly, ClassPee Della Russel who made the video public further indicated afterward that the gentleman returned all the laptops after probably seeing himself on social media.

“I am reliably informed that he picked a random guy in the vicinity where the company is located, gave him an amount of GHC50 as a gift and convinced the guy to deliver the laptops to the security at the company where he claimed to be a worker,” the reporter said.

“According to his delivery person, Mr thief said he was running late for a meeting elsewhere but needed to just drop the laptops in the office at the company,” it was further stated.