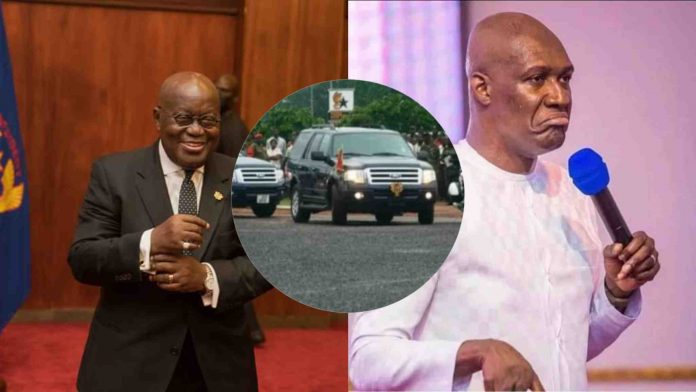 Founder and leader of Alabaster International Ministry, Prophet Kofi Oduro has called on President Akufo-Addo to wake up and set things right.

He urged politicians who are corrupt and power drunk mismanaging Ghana’s economy to be careful and desist from such acts. He also asked President Akufo-Addo to shine his eyes on his appointees around him.

His views were contained in a Facebook post dated December 27, 2021, and titled: “THE COMEDY, WASTE, IMPUNITY & NO FEAR OF GOD…!…”

“He never believed that things will happen under your watch,” he said before he slammed the issue of travels abroad for health reasons, “we can say Halleluyah to you this morning because the truth is hurtful,” he said.

Shocked Kofi Oduro noted the large number of cars that accompany the President on his tours as recently vomited twenty-two(22) of such vehicles.

“Yesterday I counted one, 22 Land Cruisers in a convoy and when I look at the roads the cars are driving on, Your Excellency, I can see a visionless and a helpless Ghana.

“Therefore, repent your Excellency sayeth the Lord…. Repend NPP governemnet. Repent all of these people who are proud of this bloodshed, repent sayeth the Lord.