LGBTQ Rights Ghana, a social group fighting for the rights of Lesbians, Gays, Bisexuals Transgenders and Queer individuals has in lengthy letter urged President Akufo-Addo to accept the local and international laws that protect the rights of LGBTQ people, indicating that the President’s interview sometime ago gave them hope but recent activities have made them an endangered species in the country.

“In 2017, your position on the subject during the interview on Aljazeera gave us HOPE that finally we had a President who understood the dynamics of the issue at hand and whose government would be tolerant to the rights of minoritized groups like us…But events since that time have worsened our plight and made us become more endangered,” portion of letter read.

The LGBTQI group appears to be going through hell in Ghana after opening offices in the Greater Accra region of Ghana to advocate for their rights.

A lot of people have condemned the group leading to the closure of all offices opened in parts of Accra.

President Akufo-Addo at the installation of the 2nd Archbishop of the Anglican Church held in Asante Mampong on February 28, said that he will not give it a thought for same-sex marriage to become legal in Ghana as far as he is concerned.

In Parliament, some seven parliamentarians have said that they will sponsor a bill that criminalises activities of the LGBT+ community in much clearer terms since the current law appears unclear on the illegality of LGBT+ activities in the country.

This and many more has pushed the group to call on the President to allow them to freely operate in the country as every citizen.

Read their full statement below: 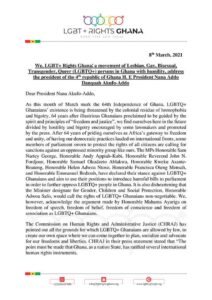 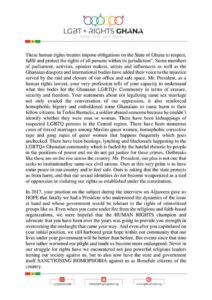 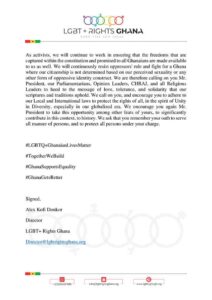 About Nana Kay 1274 Articles
Nana Kwame is passionate about changing his environment with his stories and always strive to give stories that have impact on lives. 27 years of age and a graduate of UCC. For your advertisements, kindly contact our team on 0205869285.